A feather is a general term describing any kind of inclusion we see within a diamond. Feathers were formed inside the diamonds when the diamond was formed billions of years ago, or when it was pushed to the earth’s surface. So if a diamond with a feather inclusion has survived formation, emplacement, mining, and faceting, it is really doubtful that an included feather will cause a future durability risk.

Feathers can be found in stones that range from VVS1 to I3. When observing at feathers, pay attention to its size and position. Generally, if a feather does not create an opening on the surface of the stone, if it does not reach the girdle edge, or if it does not connect to other feathers near the surface, then there should not be any durability issue. If you are worried regarding the feathers that are present within your diamond, then you should really consider seeking the advice of a qualified independent appraiser. Feather inclusions should be examined on an individual basis. A feather is a void or separated plane within the diamond’s internal structure. Larger feathers in SI clarity graded diamonds may be eye-visible and often I2 and I3 clarity diamonds have large feathers that can create structural integrity concerns, which is one of the reasons the Blue Nile does not carry those clarity grades. Higher clarity stones may still have feathers but are not as much of a problem

Ways to figure out a Feather

When examining your diamond for feather inclusions, remember that your diamond has completed a tumultuous and incredible journey.

Before a diamond reaches the hands of a retailer, it has endured intense heat and pressure, as well as a highly abrasive production process, to achieve its characteristic sparkle and brilliance. The majority are mined in large-scale open pit operations that move massive amounts of earth to locate a single diamond crystal. Diamonds are also mined from alluvial deposits, after surviving centuries of tumbling in ancient riverbeds. If diamonds survive the mining process, the rough go to a manufacturing house to be sawed or cleaved, bruted, polished and—finally—boiled in acid to remove any remaining grit. It’s a rough process for a little piece of carbon.

The affects of Feathers on diamond clarity:

Diamond grading focuses on the presence or absence of imperfections, and not necessarily on how they affect the look of a diamond. Many feathers are tiny and practically transparent. Some feathers are only visible from the back end of a diamond and from the front. Usually, small feathers are not visible, even with a 10x jeweler’s loupe. Large feathers, however, may be readily visible or visible when light hits it at a certain angle.

The shape of a diamond also affects the visibility of a feather. Many types of imperfections are readily visible in emerald-cut diamonds. However, if the imperfection is a feather, the emerald cut diamond usually remains eye-clean. Radiant cut diamonds often also remain eye clean even with the presence of feathers within the diamond.

A feather in itself is not a durability issue. A feather is just one of many names given to so many inclusions we find in the diamonds. Sometimes a feather is totally innocuous and small although it can be a large and dangerous inclusion. The word “feather” alone means very small while we describe the term “durability.”

What one must look out with feathers in locations and sizes such as might have an effect on creating a weakness in the crystal structure of the diamond so that further opening or breakage might occur. When a feather creates an open fissure through the girdle, near a thin zone, near a pointed tip or sharp corner, there is increased potential for damage or breakage. A large, open feather in the crown or table can be increased in size, thereby lowering the clarity grade and could even lead to total breakage. This is rare, but all damage in diamonds is reasonably a rare occurrence.

Durability issues primarily associate themselves with already existing chips, fractures, extremely thin to very thin girdles, cleavages, very shallow crown angles, sharp corners, shallow pointed tips. It is used to include pointed culets, but do to mounting style changes, pointy culets hardly ever become damaged in modern settings. On a secondary level, feathers that break the surface and crystals which break the surface are also somewhat problematic, but not on the level of the primary causes of further or increased damage. Anything which is declared as “open” may cause harm in terms of its durability.

Most feathers do not pose a risk to the diamond’s durability. These feathers were present since the formation of the diamond, surviving the tough process of getting to the surface of the earth. Once mined, these diamonds were also subjected to getting cut from rough diamonds. Predominantly, the presence of feathers does not disrupt the durability, the beauty or the brilliance of each unique diamond.

Feathers aside, diamonds are not impervious to chipping or breaking. They are the hardest natural substance, which makes them extremely resistant to scratching, but they also have “perfect cleavage” in four directions. A cleavage plane is an internal direction of weakness, and gems with perfect cleavage can be split along those planes. Cleavage is often seen as a flat, clean break. Diamond cutters sometimes use cleavage to divide roughly before faceting. Before the invention of the rotary saw, cleaving was the only practiced method used to divide roughly during the planning process.

Thus, your diamonds are your assets, that costs you a fortune, your long-time savings and what not! Keep yourself updated with all the factors of the diamonds while buying one, so that You may be proud of yourself as a smart and learned buyer and would be able to flaunt your flawless diamond all around! 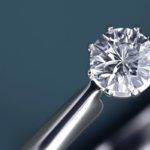 What is a Solitaire Ring 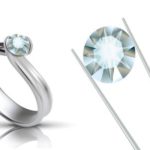 How to choose a Diamond step by step